The line from Laroche Migennes to L'Isle sur Serein was decided by the Council General of the Yonne on the 3rd August 1881.

By the 14th April 1885 the construction of the line was completed and extended for 74,900 kilometres. It took two and a half years to construct, which was not a  long time  considering the epoque.

During the 2nd world war there were problems because  of the restrictions on fuel so even more people used the train instead of cars. By 1947, however, both the number of passengers and the amount of freight had declined considerably.

On 31st December 1951 the Council General of the Yonne decided to close the line.

After 64 years and 78 days of good and loyal service, the little line of the Serein passed into prosterity and entered into a legend.

The line Laroche Migennes - The isle on Serein decided by the general Council of Yonne on August 3rd, 1881. It is on April 14th, 1885 when the final line will be arrété, 74,900 kilometres in lengths it will be constructed in 2 and a half years, what is not extreme for epoch. The opening will be real on October 15th, 1887 by bylaw. Some figures:En on 1913 (auspicious year) the banger transported:Plus personnesPrès 153 000 of 57.000 tonnes of marchandises3 338 animauxEn on 1933 the traffic passengers was not more than of 67 377 persons, and 22.950 tonnes of marchandisesDurant the war of 39/45 the banger will find a rebound of activity further to restrictions of essence, but reprieve will not last and from 1947 the traffic of passengers and the goods collapsed. Dices during the future of CFD of the valley of Serein was sealed. The general Council of Yonne decided on the closing of the banger on December 31st, 1951. Aprés 64 years and 78 Days of good and loyal services, the small line of Serein went on forever and entered the legend. 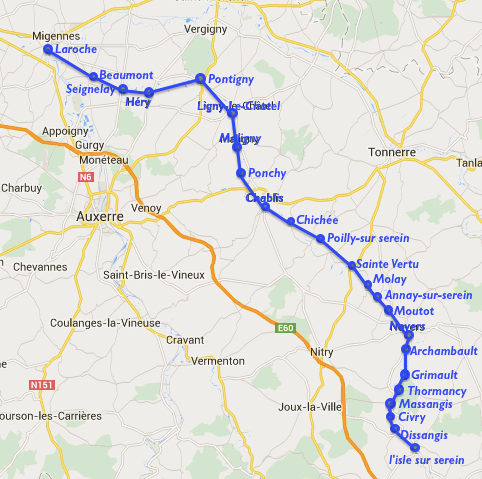